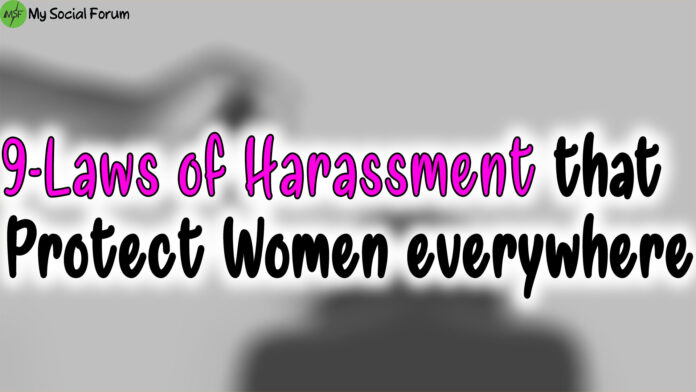 Every Women Must know these 9 Harassment Laws

Pakistani women rank the lowest in the index of gender equality. They are put through situations like stalking, catcalling, and harassment as soon as they step out of their houses.

There is alarming evidence showing that 99% of Pakistani women face one or the other form of harassment daily, be it on public transport or during work hours or only or even while shopping.

The Constitution of Pakistan clearly states that Sexual harassment is an infringement of ones’ fundamental ‘’right to dignity” as it is preserved in the Constitution of Pakistan.
But this situation is aggravated further as most women, young ladies, and girls are not aware of their fundamental and legal rights. They are forbidden even to discuss the issue with parents, siblings, and friends.

The legislation that governs the harassment laws in Pakistan:

There is a Section 2(H) that defines the Protection against Harassment of Women at Workplace Act 2010.

The law says that any one caught who makes unwelcoming sexual requests or advances for sexual favors, through his physical or verbal conduct (workplace harassment) leading to interference with work performance or creating a hostile, offensive or intimidating, workplace environment for co-workers, is be liable to following punishments.

Some of the Minor Penalties include:

Funny Memes & Reactions to the Tik Tok Ban In Pakistan