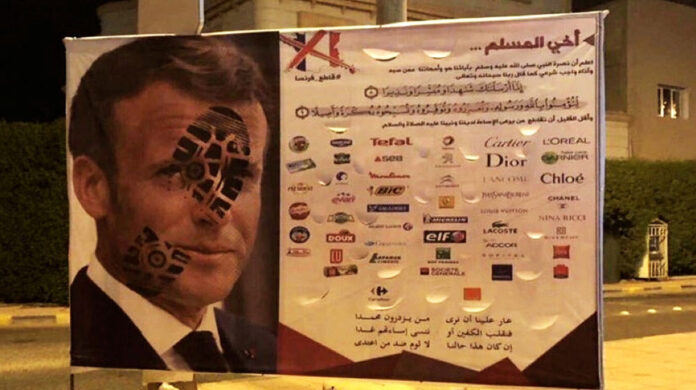 Social media is demanding for a boycott of the products that are made in France.

Twitter and other social media trends #BoycottFrenchProducts across the Globe including Pakistan.

Many of the Arab countries, like Kuwait, Qatar, Saudi Arabia, and Jordan, have joined in with practical measures. Kuwait and Qatar have now removed all French products from their markets.

People are now also sharing all the photos of the French goods that Muslims should be avoiding including brands like Cartier, Lacoste , Chanel, Nina Ricci, Dior, Givenchy, along with food products, all the French car manufacturers, and French cigarette brands.

These are the French products people around the world frequently use. Identify them and boycott them in the protest to defame Prophet Mohammad (Peace be upon him) by showing cartoons. You can do many thing by boycotting their products. #boycottfranceproducts pic.twitter.com/B7F9XxCLBz

No more of French products🚫 pic.twitter.com/ItFc1RybI6

The Pretext of the boycott

This trend started last month when the French President supported and backed the French magazine Charlie Hebdo’s decision to republish the caricatures of the Prophet Muhammad (PBUH), calling it a freedom of speech. This led to the publishing of mentioned blasphemous cartoons all over the country under governmental support, a move that instigated the international Muslim community across the globe.

The publication of the cartoons led to the killing of a French teacher named Samuel Paty by a Muslim student for displaying the caricatures during a class on the topic of ‘freedom of speech’.

The President, who is known for enticing Islamophobia for his own political gains declared, the killing a national tragedy. not just that the President also gave the French teacher an official memorial labeling him a ‘victim of hate and stupidity’.

Criticism of The French President:

His continuous anti-Islam rhetoric has attracted condemnation from almost all of the Muslim leaders, including Recep Tayyip Erdogan the Turkish President, and Prime Minister, Imran Khan. Erdogan has been quoted as saying that President Macron is a ‘mental patient’ and suggested he should consult a doctor.

On Saturday while addressing a ceremony, Erdogan stated that Islamophobia will always overwhelm Europe and it will lead to an end of itself during this cycle.

Meanwhile, at home PM of Pakistan Imran Khan has accused Macron of intentionally provoking Muslims instead of putting a healing touch on their wounds.

Khan also said that Macron has decided to spread Islamophobia and attacking Islam in the process rather than the terrorists who have carried out violence, be it the Muslims, the White supremacists, or the Nazi ideologists.