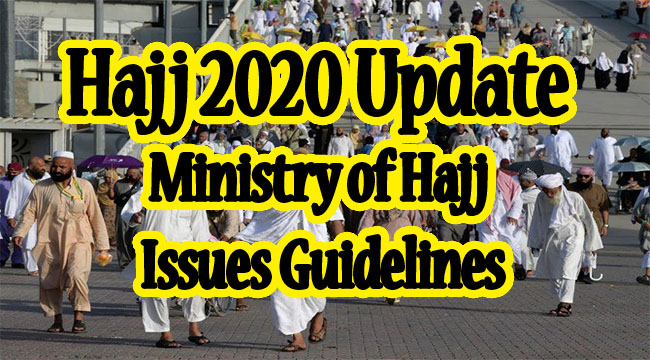 Ministry of Hajj and Umrah has made a major announcement today 23 June 2020 to allow a very limited number of citizens and residents (Not International) who are already in the Kingdom to perform Hajj this year.

The below are the guidelines issued by the Hajj Ministry:

1-Pilgrims will be tested before performing Hajj and will have to quarantine for 14 days after they finish their Hajj.

2-Only residents and citizens under 65 years will be allowed to perform Hajj this year. More than 65 years are also not allowed.

3-People with chronic diseases such as heart patients and diabetes patients will not be allowed to perform Hajj.

4-The health status of every pilgrim will be monitored continuously on a daily basis.

5-Hajj will be performed in small/smaller groups to enforce social distancing.

6-The numbers of Hajj pilgrims this year will not reach tens of thousands of pilgrims.

7-No International Pilgrims will be allowed.

8-Special Hospital in Makkah to deal with emergencies.

How To Burn Calories at Home?

The Ministry of Hajj has not announced the procedure to apply for Hajj for this year.

The Cost of Hajj

Considering the additional precautionary measures Hajj agents have to take to protect local pilgrims, the cost of Hajj is expected to go higher than last year.

Last year, the cost of a medium level hajj package was around SR 7,000. In my personal opinion, the minimum cost would be around SR 10,000.

More than 2.5 million people performed Hajj last year from all around the world.

Statement by the Ministry of Hajj

In a statement on Monday, the Ministry of Haj and Umrah said and in light of the continuation of the coronavirus pandemic and the risks of infections spreading in crowded spaces and large gatherings, it has been decided that Haj for this year (1441 H/ 2020 AD) will be held whereby a very limited number of pilgrims from various nationalities who already reside in Saudi Arabia, would be able to perform it.

Latest News October 20, 2020 0
There is good news for TikTokers in the country. After the company guaranteed to block all the accounts involved in spreading "immorality and indecency,"...

Pakistan has became the world’s “Second Muslim Country” that is producing...