A photographer captured the rare moment of the bride in her wedding dress with the groom by her side, both simultaneously puffing on the same cigarette, in perhaps the most peculiar wedding video you would ever see. The video went viral, and our moral police in Pakistan couldn’t be more pissed off.

“You can’t say or count it as a bad habit, but the amazing understanding of one soul,” the caption of the video read.

Oh wait… what? See, maybe if the sharing of a ciggy was not presented as a sign of understanding, the video would not have attracted so much criticism. Basically, the caption indicates that the deep connection and understanding shared by the couple are expressed in this act.

Also Read: In Sialkot, three wives of a ‘talented husband’ are looking for a fourth wife.

The bride is clearly content and celebrates with complete gusto some of the most important moments of her life. However, as we all know, in terms of ethics and morality, our society requires couples to uphold those limits. Pakistanis were clearly unable to contain their ‘excitement’ and placed all possible comments under the message.

A bride smoking at a wedding of her own? Haw Haye! Haw Haye!

It was always expected of our brides to have a ghoonghat (head covering veil), to be still, eyes lowered, calm and expressionless. They are in truth, meant to look like they are scared of this new phase of life. Kyon ke dulhan sharmeelee he achi lagti hai (because only when shy does a bride look good). 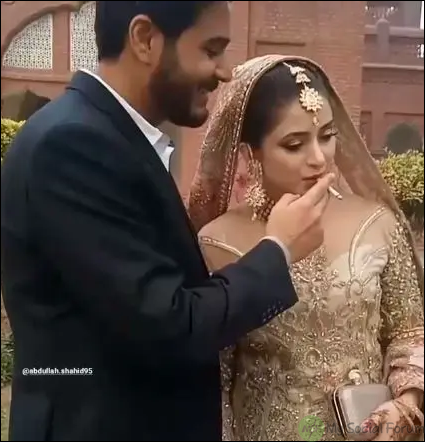 The pattern has now altered, however. Brides no longer want to sit and behave like a mannequin in one position. It is also their wedding, and they are just as entitled to enjoy it as the grooms are.

We see another video every now and then of the bride dancing at her wedding. And the indignation that it causes is crazy! So you can only imagine how smoky our people would have been watching a bride smoking a cigarette at their own wedding.