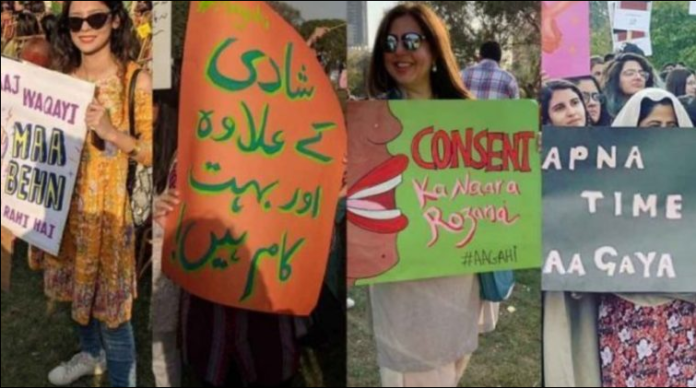 People are once again pointing fingers at Aurat Azadi March, also known as Aurat March. Twitter is flooded with unfounded tweets, ranging from accusations that the march is foreign-funded to suggestions that it is lobbying for “Western agendas.”

The shady dealings didn’t stop with foreign money. There was also discussion about how it’s more important to limit LGBTQ rights than to empower women. (You know, priorities)

The reason I am Against #AuratAzadiMarch from the very start. We knew that their Agenda is not to protect the rights of #Women but to legalise L G B T Q in Pakistan. They are fully exposed now. More to come…!!#MeraJismMeriMarzi#AuratMarch2021 #ForeignFundedAuratMarch pic.twitter.com/Rnd7JevkYS

There was, of course, female character assassination and over-generalizations in the mix. How many of these people who are making broad generalizations have done some study into women’s rights movements?

There are few bloody liberal aunties who are working against Pakistan and Islam.#ForeignFundedAuratMarch#MeraJismMeriMarzi pic.twitter.com/0VYqHMilt8

A day before Aurat March, the top trend on Twitter is claiming the march is "foreign funded."

Why can't haters believe women can organize on the grassroots and build a movement through their own efforts? Why does this idea appear so foreign to them?

We live in a male dominated society where patriarchy is deep rooted. So the #AuratMarch2021 should be supported. But i was a bit shocked when I read a couple of their demands. I would request every participant of the march to read this thread and try to counter my points.

Aside from conspiracy theories, other people took a more pragmatic approach. To be honest, it’s no secret that the state is largely reliant on foreign assistance. Yes, that is what loans from the International Monetary Fund (IMF) and funds from the Asian Development Bank (ADB) are.

Foreign Funded Aurat March is a weird trend in a country that runs on IMF loans.

When will women be able to exercise their civil rights? Is it true that the wellbeing of people in a welfare state is a “Western agenda” that we must oppose? How can we justify Pakistan’s epidemic of sexual abuse against women, girls, and even animals?

#ForeignFundedAuratMarch
The government should make public the sources where these women are receiving funds from. pic.twitter.com/c3yyfImNkd

Every year, we hear the same tired claims against Aurat March, ranging from assaults on culture and Islam to international funding. Have any of these arguments ever been proven to be true?

Leave your thoughts in the comments section below.