At least 19 people perished in Murree after becoming stranded in cars in the snow during a tourist influx. The Punjab administration named Murree a disaster-stricken area and requested assistance from the Pakistan Army.

Murree has been receiving steady snowfall for the past two days. Hundreds of thousands of visitors are expected to arrive in the town. 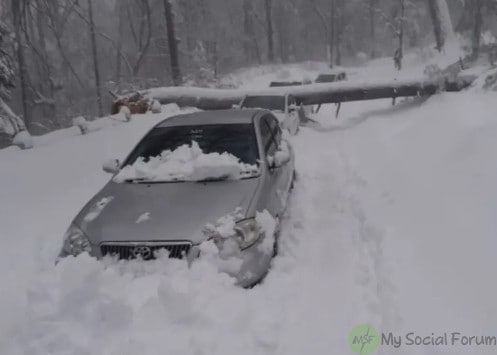 Around 1,000 cars were stranded on the hilltop, and the Punjab chief minister issued orders to speed up rescue efforts and provide assistance to the stranded tourists. Cars are no longer permitted to enter Gailyat in Khyber Pakhtunkhwa, according to the province’s chief minister.

In a video message, Interior Minister Sheikh Rashid Ahmed said tourists had rushed to the hill station in such huge numbers “for the first time in 15 to 20 years,” causing a “major situation.”

He claimed that the administrations of Rawalpindi and Islamabad, as well as police, had been working to rescue individuals who had become stuck. Meanwhile, the Pakistan Army has dispatched five platoons, as well as Rangers and the Frontier Corps, on an emergency basis.

This is terrible, people ought to be more responsible and civilised! #Murree #Pakistan pic.twitter.com/rRd28xZ1sP

Around 1,000 cars were stuck on the hill station, according to the ministry. “16 to 19 deaths have occurred in their autos,” he revealed.

“With God’s help, we should be able to rescue 1,000 cars by this evening.” We’ve also decided to put a stop to people walking. It’s not the right moment for [pedestrian] tourists to come.”

According to reports, those who died were between the ages of 21 and 49.

Usman Buzdar, the Punjab Chief Minister, termed the Murree crisis a disaster and announced a state of emergency in hospitals, police stations, government offices, and the Rescue 1122 services.

The chief minister’s office issued a statement saying that rescuing stranded visitors was his “top concern.” He went on to say that they have access to all rest houses and state buildings. Food and other necessities are also provided.

The night prior, about 23,000 cars were removed from the area. He informed me that the rescue mission was in progress. Buzdar urged residents to obey the police and district administration’s directions and cooperate with them.

Families who travelled there for the sole purpose of having fun have all died in their vehicles. It’s awful to watch anything like this happen, and it serves as a sharp reminder that if the government wants to increase tourism, it must also ensure people’s safety during severe weather.