It’s a piece of big news each time a female pilot joins the list of becoming a commercial pilot. This time, however, it is even larger! Sindh traffic warden Shakir Ahmed Malik’s daughter became the first woman General Duty (GD) pilot in the Pakistan Air Force (PAF).

After being commissioned as a flying officer, Nashrah Shakir, from the city of Karachi, was promoted. As it seems, at the Meritorious Defence Chapter tuition centre, Shakir studied. The social media account of the tuition centre posted her image and congratulated her on this accomplishment. 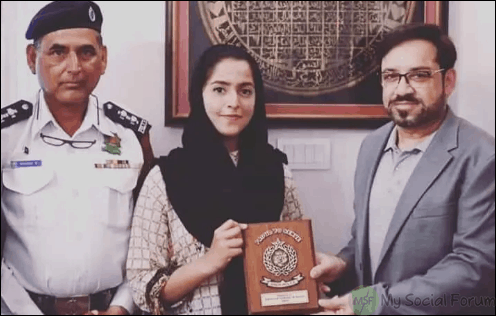 We congratulate our Meritorious Student, Nashrah Shakir, and her proud parents on having the GDP Flying Officer commission in the Pakistan Air Force. In the line of service, may Allah give her more success,” the post read.

In the PAF, a prestigious title is the status of a GD pilot. These pilots are capable of flying more powerful aircraft and are not limited to limits like venue. In addition to this, they also have their own set of rules for aviation.

We have seen how women are most frequently restricted to the roles of air hostess and primary crew in this specific industry. Therefore, such news is often a big deal in the male dominated culture, such as Pakistan.

Social media individuals have also praised her for smashing barriers and shared the expectation that her appointment would pave the way for more women wishing to join the air force. Also circulating on Twitter is a happy picture of Pakistan’s latest GD pilot.

Congratulatory and laudatory tweets are flooding in

Proud Of You. You Are The Future Of Pakistan https://t.co/e8Znlb5lSc

A moment of pride ❤️ Many congratulations to the entire family !! https://t.co/JI1Hn8Q3rO

Congratulation to the proud parents & their brave daughter for becoming GD pilot. Even more heartwarming to see the trend of girls joining forces especially Pakistan Air Force. More power to the daughters of the nation. https://t.co/RZAsmLGHhC

While many might say that the course is short and easy to complete, how women like Shakir go beyond the traditional grades and fulfil their dreams is what matters. They are breaking the norm and doing something to make their dreams come true. To them, hats off!

For all the people out there, women like her who work in the renowned institutions of Pakistan are setting a great example. That is to say, inspiring a woman is not just advantageous to herself. In reality, for men, culture, the environment, and the overall economy, it is beneficial. Maryam Mujtaba, the first ever female pilot from Kashmir, is also one of them.