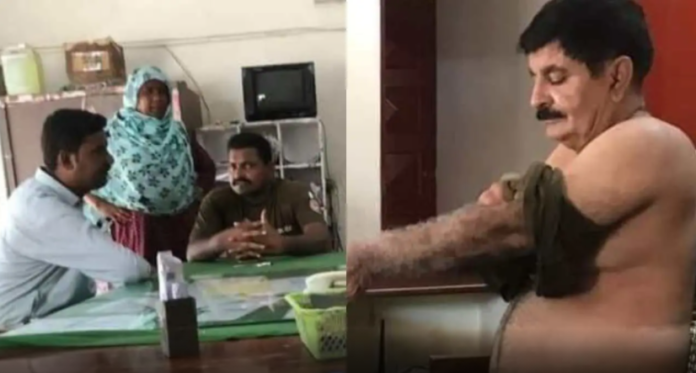 Spread the love
A great number of cases are rising in rape, abuse and sexual harassment in our country, this has become a huge shock for our country. Have we ever pondered on the explanations of such evil events? At some point, all of us play an integral role in this nuisance.However, can anyone imagine a local servant like a police officer getting nude in front of a female who came to his office just to get assistance from the police department?

In Punjab, 1 police officer demonstrated this point. A policeman committed such a shame act at Jhang Model Police Station that left all the people of the nation extremely shocked in disbelief.

Subordinate started laughing at the officer who removes his clothes

This indecent behavior was later on aggravated by the officer’s subordinates. As their leader was removing his dress, they continued to smile and make fun.

Putting a helpless lady in such a state, is no more than an evil act. What point was being delivered by the police officer? Such reasons that it was very hot and he needed to remove his clothes to cool down? Or was that officer directing at anything? Terrorizing that lady or harassing her?

In both states, this is extremely immoral and also indecent to even bring something in your mind related to this. These officer who are salaried by taxpayer’s cash, they consider themselves above the law and order.

Isnt it harassment? A cop half naked in model police station?

This abominable action of indecency should stated a crime in the eyes of the law. Initially, females don’t submit a file in the police normally. And after daring to do this, they often face beasts like this especially the policemen who have the idea that harassing a female in distress is the right course of action for a decent man.

Moreover, internet users are now demanding the police officers and questioning Punjab police to banish this man who is insulting that lady.

Nevertheless, District Probation Officer Jhang took this evet seriously and announced that serious action will be taken against all these policemen. He mentioned that a suspension letter has been issued for them and an inquiry will take place soon regarding this matter.

DPO Jhang: "All responsibles have been immediately suspended and an inquiry into matter has been initiated against them." https://t.co/lBYofKgjGp pic.twitter.com/WvVO3kCd6r

In addition, according to some research, Aurangzeb who is Satellite town head and his subordinate, Zafar Danish are right away suspended due to negligence in law and order and certain protocol of the department.

Nowadays, a brave Pakistani female revealed a police officer that allowed the accused individuals who harass her, to escape.