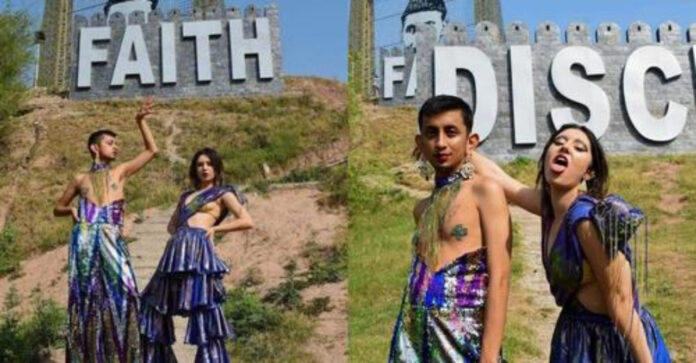 An indecent and pornographic photoshoot that took place in front of a monument that was dedicated to our beloved hero Quaid-e-Azam Mohammad Ali Jinnah in Islamabad has been viral and the internet users are not only expressing great anger but they are also calling the authorities to take strict action against it. On 2nd August 2021, a band called Mystical Shayari has a photo shoot and made it viral on social media. In this picture, it can be seen clearly in which a young man and woman both were standing right outside of the Quaid-e-Azam in an indecent way by wearing vulgar clothes.

Not only wearing vulgar clothes, but they also captioned it with ‘FAITH. UNITY. DISCO,’ by making fun of Jinnah’s motto of ‘Unity, Faith, and Discipline’. But according to them, they did this photoshoot for the sake of ‘human rights and gender justice.

A recent photoshoot shot in #Islamabad in front of the Quaid monument.

They shared in response that, “we did this shoot to show respect for Pakistan, and specifically to these three ethics that we are proud to uphold.”@dcislamabad sir ?????? Is it okay ?? pic.twitter.com/DZB81FCZOf

Is it Islamic Republic of Pakistan?

Is it Islamic Republic of Pakistan?

The DC Islamabad @hamzashafqaat is requested to arrest the couple, who displayed extreme obscenity in public in the federal capital.

Anyone with any information may plz share with us https://t.co/nrRvD9cRky

The climax of the Story

Moreover, investigating the Cafe Sol is also the main part of this controversy. The main reason for being dragged into the controversy is that Mystical Shayari was always held in one of the private events at the cafe, so now people are assuming of having a connection between them.

You posted a full page for their fund raiser on 14 Jan 2021 and a part of your citation is visible. @dcislamabad @ICT_Police @DigIslamabad can do the forensics. pic.twitter.com/NNkCTzyQuP

Moreover, Faraz Talat, the founder of Cafe Sol allegedly owns the band. A Facebook page reported this last night, however, the post has been deleted.

Cafe Sol and Faraz Talat have denied the allegations

The allegations against me are baseless. And I have absolutely no connection with the controversial photo shoot.

Mystical Shayari‘s posts demolish on social media and they received enormous backlash for spreading indecency and contempt for the Father of the Nation. Since then, the band has completely deleted all of its social media accounts. The photographer Eman, designer Raja Wasey and the band members who are recognized as Casey and Zulfiqar have also completely deactivated their social media accounts and amongst the censure.
The photos are spread all over Twitter with #ArrestTheCouple and all net users strictly protest demanded for strict action against this couple…