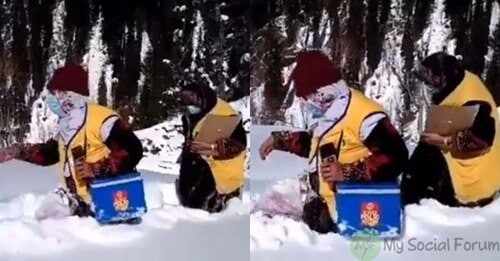 Front-line Workers are the main pillar of the Polio Eradication Initiative program in Pakistan. They go to every doorstep in order to make our country free from polio by delivering polio drops to the children under five years of age and in this way they fulfil their responsibility in harshest conditions.

Now a days, the winter season is on its peak and so as the extreme cold weather of Azad Jammu and Kashmir (AJK), the daring act of our front line women worker is seriously appreciable that they are making their way through several feet of snow and putting their lives in danger in order to deliver polio vaccines to children, as the campaign is going on. The act is really appreciable because in this condition of extremely cold weather where they are making their way to cross knee deep snow to deliver polio drops to the kids. They are selflessly dedicating their efforts so that our dear homeland Pakistan becomes polio-free.

Our frontline polio heroes are unstoppable❕

The above video was captured in the northeastern province of AJK.

Due to lack of basic public health services it is really hard for the people to reach settlement. As the time passes, today, the Pakistan Polio Eradication Program has started emphasizing to enhance synergy with the Expanded Program on Immunization (EPI).

Through this synergy, the practice of minimization in the ratio of increasing polio in Pakistan takes place. For this purpose, the campaign of polio has been started, the dedicated women go to one place to another at every door step for the sake of children in order to minimize  polio and hopes to increase immunity of children through strengthened routine immunization.

Also Read:
In Sialkot, three wives of a ‘talented husband’ are looking for a fourth wife.

It is the foremost import duty of everyone to get their child polio vaccinated because this virus is really a big hurdle to the future well-being of our nation’s children. These workers are playing a significant role in defeating this virus by delivering polio drops to the children at their door step.

Hats off for these civilian national heroes.
💁‍♂️ https://t.co/gW7wXCGgIK

Just feeling lucky that we have people like that Salam Salam 👍🏻👍🏻👍🏻❤️❤️we paki https://t.co/nDLk3HMxBp

They really deserve respect honour and appreciation! The eradicating polio campaign is not only the source of protecting children from virus but also the source of developing mutual understanding of preventing disease among the people.

I really salute the solidarity of all polio workers and lady health workers. We as a citizen is our duty to unite on one platform to defeat this virus and save current and future generations from polio by delivering polio vaccine to our children and giving awareness to those who are unknown of this disease.

Karachi college student ‘abducted, gang-raped’ & No-Body is talking about this!