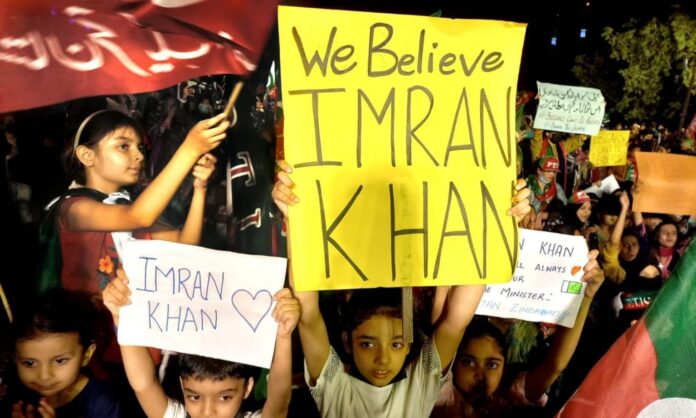 Supporters of Pakistan Tehreek-e-Insaf (PTI) gathered to the streets in large numbers in all major and minor towns to demonstrate their support for their leader and former Prime Minister Imran Khan. Following Khan’s call for peaceful protests, party members showed up.

Khan warned in a speech to the country the day after he was ousted from power that he will not tolerate the establishment of a “foreign administration” in Pakistan and that if that happened, he will seek public support.

“We are not a tissue-paper nation,” Khan remarked during a live transmission, insisting that Pakistan does not want unilateral relations with any country.

Khan had earlier in the day, on April 10, tweeted that today was the start of a “freedom battle” against a “foreign regime-change conspiracy.” “It is always the people who safeguarded their own sovereignty and democracy,” he stated in an attempt to rally his supporters.

Pakistan became an independent state in 1947; but the freedom struggle begins again today against a foreign conspiracy of regime change. It is always the people of the country who defend their sovereignty & democracy.

The locations for the protests were announced by PTI hours before their supporters took to the streets.

Protest points nationwide. Shortly the Nation will demonstrate how they stand with their leader @ImranKhanPTI ! #امپورٹڈ_حکومت_نامنظور pic.twitter.com/52Mjjs8a7L

From Zero Point, the capital’s protests began. Flags were waved and slogans in support of the former prime minister were chanted.

Hammad Azhar, a PTI politician in Lahore, shared a video of a gathering leaving his NA-126 constituency for Liberty Chowk.

Liberty Chowk’s crowd is already charged!! Today the Nation will demonstrate how they stand with @ImranKhanPTI ! #امپورٹڈ_حکومت_نامنظور pic.twitter.com/sKvWBecSH7

A large crowd of demonstrators, including women and children, gathered at the Peshawar Press Club to show their support for the deposed prime minister.

"We want #ImranKhan back"
Pakistan will not rest until fresh elections are conducted!

A demonstration was staged on Rashid Minhas Road in Karachi, with a huge number of supporters in attendance, including women and children.

AwamI adaalat bhi Raat ko lag gaye… it’s not over yet it seems.. unprecedented scenes, spontaneous outpouring,a lot of challenges for pti to overcome,but no doubt the beginning shows it will b a fun game of chess from now till the end pic.twitter.com/RF160pv3pT

Overseas Pakistanis have also expressed their support for Khan.

My brother in law lead the protest in Canada against the foreign regime in Pakistan pic.twitter.com/S7HQtMmxkl

Khan expresses gratitude to protesters for their “wonderful outpouring of solidarity.”
In a tweet just before midnight, Imran congratulated his fans.

“Thank you to all Pakistanis for their incredible outpouring of support and emotions in protesting against the US-backed regime change aided by local Mir Jafars to usher in a coterie of pliable crooks all out on bail,” he wrote.

Thank you to all Pakistanis for their amazing outpouring of support & emotions to protest against US-backed regime change abetted by local Mir Jafars to bring into power a coterie of pliable crooks all out on bail. Shows Pakistanis at home & abroad have emphatically rejected this

Never have such crowds come out so spontaneously and in such numbers in our history, rejecting the imported govt led by crooks. pic.twitter.com/YWrvD1u8MM