One more grisly incident happened in the province of Sindh, a women from Karachi and her daughter were purportedly raped by a gang in the Kashmore area. One of the rapists have been caught by the police, others have escaped. The respective ASI has been praised for doing his job vigilantly.

On the other hand, fatalities have been in a lurch. According to the viral social media audio and video posts, the condition of the female child, who is only four years old, is mentally critical, and the condition of the mother is no more different. The daughter, who was admitted to the National Institute of Child Health, is seriously injured as per the reports of the doctors.

Dr. Jamal Raza, director at the National Institute of Child Health, has told that the little girl was previously treated in Chandra Medical College Hospital, where the doctors have done her surgery. Now she is in the Intensive Care Unit in NICH.

The doctor has further said that the board comprised of medical specialists had been arranged, if needed the help of a gynecologist and other medical professionals would be pursued.

The reports from other sources:

Similarly, other sources have also reported that the child has been extremely infected. Moreover, there are also shreds of evidence of contamination in the child’s body.
Now the child is on medication, and as per the doctors, there is no urgent need for any further medical surgery. The clinicians have been appraising the condition of the injured while trying to control infections. 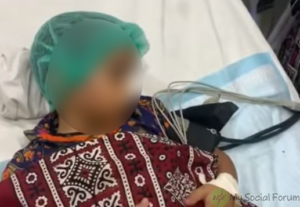 The present situation of victim:

On Friday, the doctor reported that the health of the little girl was better, and the chest tube had been removed from her body.

Despite the positive reports of the doctors, the mother of the child has been cynical about her daughter’s health.

The severity of incident:

Following the statistics, the sufferers had been beaten and raped for days at the place of occurrence. Furthermore, the women did not ran-away on her own instead called by the felonious persons guile fully for a job.

After absconding, the woman approached the ASI Muhammad Bakhsh to release her daughter from abduction. The police officers took action expeditiously and put his daughter in danger to lure gangsters to capture criminals. Afterward, a ceremony was arranged in honor of the respective ASI at the Central Police Station, Karachi. The Inspector-General announced the cash reward of Rs. 2 million for him for his heedful work.