In a statement on Wednesday, six major generals of the Pakistan Army were promoted to the rank of lieutenant general, Inter-Services Public Relations (ISPR) said.

The military’s media arm announced in a tweet that the approval for promotions took place at a meeting of the promotion board held at the Rawalpindi General Headquarters (GHQ). It was, meanwhile, presided over by General Qamar Javed Bajwa, Chief of Army Staff (COAS).

Meanwhile, Lt Gen Khalid Zia has been appointed as Bahawalpur Corps commander. As for Lt Gen Sarfraz Ali, Southern Command Chief, which includes Balochistan and other parts of the country in the south. Similarly, the new commander of the Army Strategic Forces Command (ASFC) was appointed by Lt Gen Muhammad Ali.

Asif Ghafoor has previously served as the ISPR Director-General, who is among the most influential recipients of the promotion. It is important to note here that he was named in December 2016 to the role. In addition, as the military spokesman, he succeeded Lt Gen Asim Bajwa. 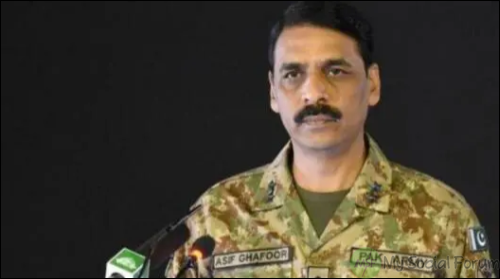 Fawad Chaudhry, Minister of Science and Technology, responded to the news and took it to Twitter to congratulate the officers. Besides, he also extended to the promoted major generals his best wishes.

Serving in the highest ranks of #PakArmy is an honour, many congratulations to all very well deserved officers for the honours bestowed upon them and best wishes…. https://t.co/bIZzlIxSic

Asif Ghafoor took charge of DG-ISPR on December 15, 2016, and the rest is history. He has governed in his place during his career. He acted as the Pakistan Armed Forces’ 20th spokesperson.