As the most marginalized segment of society, women in Pakistan are more often deprived of their constitutional rights and face violence. There has been a new incident where a man beat his sister-in-law cruelly in the middle of a lane. As the survivor called Sarah Gul asks for justice, all ears turn deaf to her.

Discrimination against women is a topic that for decades has been debated and written about. Again and again, we have repeated that such news has become a white noise that we now prefer to ignore. We are adding to the growing number of cases while simultaneously ignoring the plight of these vulnerable victims. 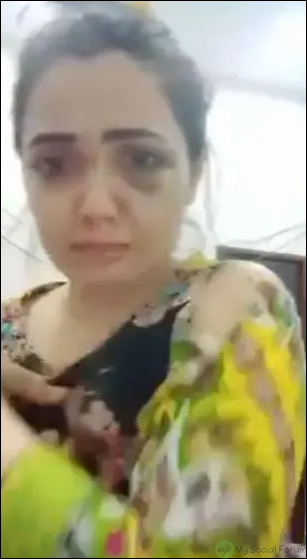 A victim of such abuse at the hands of her brother in law pleads for justice in a recent video which has appeared on social media since December.

Gul says, “Three days ago, on Saturday morning, December 26, I was going to work when my brother-in-law came and attacked me from behind in the middle of the street,” while narrating the heinous incident.

Also Read:
Police Officer Removed His Uniform, Gets Half-Nude In Front Of the Lady Who Came To File A Report

He was punching me and tearing my clothing. I want righteousness. They tell me my statements are not authentic whenever I go to Mehmoodabad Police Station,” she added. I have given them an x-ray of my broken nose, too, but they don’t believe me yet. My husband’s a labourer, and I’ve got four children. I’m a poor woman and I don’t have anybody to support me.

Gul pleads to DIG Sindh for justice, “My brother-in-law tortured me, I have bruises, my nose bone is damaged, my clothes are torn, I want justice, the police are not listening to me.”

One in four women in Pakistan has witnessed some form of violence. Around 8 million women have faced violence in the country, be it mental, physical, or sexual assault.

A victim of domestic violence, known as Tania, called her husband to risk her life in a similar case earlier. On the Internet, a video emerged, where the woman pleaded for help. Her husband tried to strangle her, according to the woman, and how she ran away to her mother’s place to save her life.

Incidents such as these are when we understand that an appropriate legal consequence is necessary for such behavior. Our women will continually be abused at the hands of men in our society before and until there is an utter guarantee of the harsh implications of such acts.

In Gul’s case, we hope that law enforcement authorities can find the suspect and put him to justice!